WHY SLOVENIA HAS THREE DIFFERENT ‘SANTAS’? 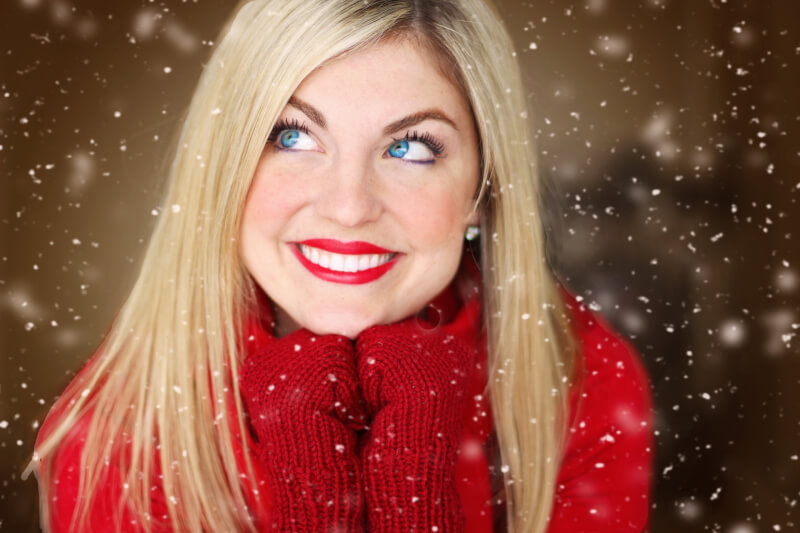 A Saint, a Commie, and a Yankee walk into a bar. They drink mulled wine, exchange weather reports, and get on the house. They are merry and cheerful, with red cheeks and lush white beards…

Let’s back up a bit; you know Santa Claus, right? He brings presents once a year, empties your wallet, hops on the Rudolph express and disappears for another 364 days. In short, he comes, he conquers, he leaves.

What would you do, if there was not one, not two, but three Santas that would visit the kids, all in this glorious month of December, stuffing presents in their tiny laps and throwing ornaments and dried fruit in their faces?

Yes, you heard correct! Three good bearded old men would gift the children, lavish them with gifts and luxuries. No, we’re not talking nonsense and yes, this introduction does have a point. It’s an absurdly unique experience that is probably one of the best things to do in Slovenia in December (apart from drinking mulled wine).

Some call it confusion; we call it diversity. Step into the holiday circus and join in on the story time to understand an honest historical Slovenian dilemma of all times: the real Santa problem!

December is a special month. It’s that time of the year when the crisp air smells of pine trees, freshly baked cookies, incense and candles, spices, snow and oranges, and surprises, surrounded by numerous colorful lights that start popping up in our homes as well as covering the streets and facades, bringing magic to life.

This fairytale lights up our towns and sparkles in the eyes of the children, helping their imagination run wild with reindeer, deep dark forests, magical elves, exotic places, and never-ending sleigh rides with beautiful white horses. It is cozy, beautiful, calming, romantic, mythical, twinkling, warm, and extraordinary. We’d suggest you put it on your Slovenia travel list immediately!

Truly, winter may be a bleak cold season with 4 hours of sunlight and 90 days of darkness, but Slovenia in December is far from depressed; people sip mulled wine, explore the Christmas markets, bake, cook, prepare, and taste Christmas food, and have loads of fun in general. Honestly, this December fairy tale is one of the top things to see in Slovenia. 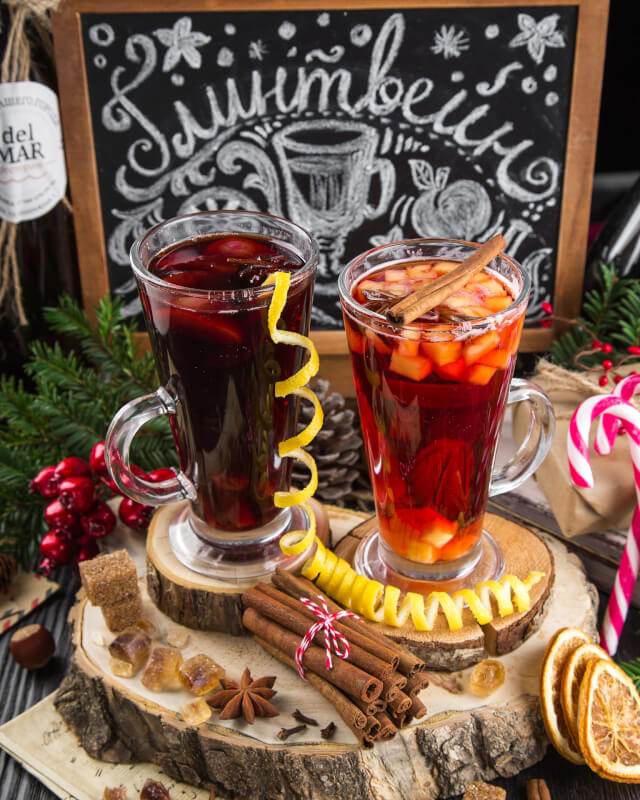 Sadly, things are not always as they seem. Remember those people strolling the Christmas markets and buying presents for their children? They’re actually much more stressed out than you think and the reason is hidden in the dark depths of December fairyland. You may want to think twice if you believe the described scenery is all there is to Slovenian December magic. Actually, it’s far from it!

Slovenian parents carry a heavy burden which is a result of traditions, politics, and globalization. It’s a phenomenon we hardly understand ourselves. It revolves around that special good bearded man that visits children every year, bringing them joy and happiness.

Yes, you’ve guessed it! We have a serious Santa problem and it doesn’t seem to be resolved any time soon. Writing a letter to Santa isn’t an easy task for the Slovenian children. After all, at one point they may find themselves writing a letter, not to one good man that would bring them presents, not two good men, but three mythical old men that all drop by in December! 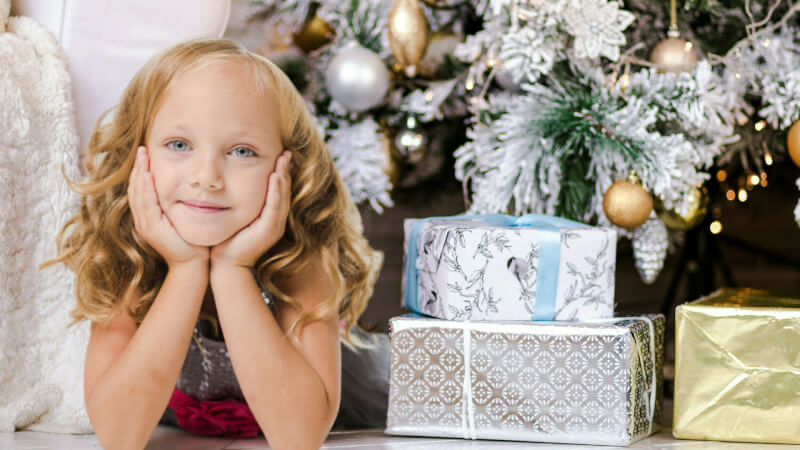 Confused yet? Above all, these three grandpas visit on different days from different parts of the world. Obviously, they don’t hang out together and they also don’t share the same companions on their long tiresome road to gift-giving and joy-bringing. But make no mistake here: puzzling or not, we love them all and always look forward to their visit!

Are you ready for the ultimate Christmas confusion?

Let us break this strange tradition bit by bit and enlighten the situation. We promise, by the time you’re done with the article, you’ll love all three beards as much as we do! 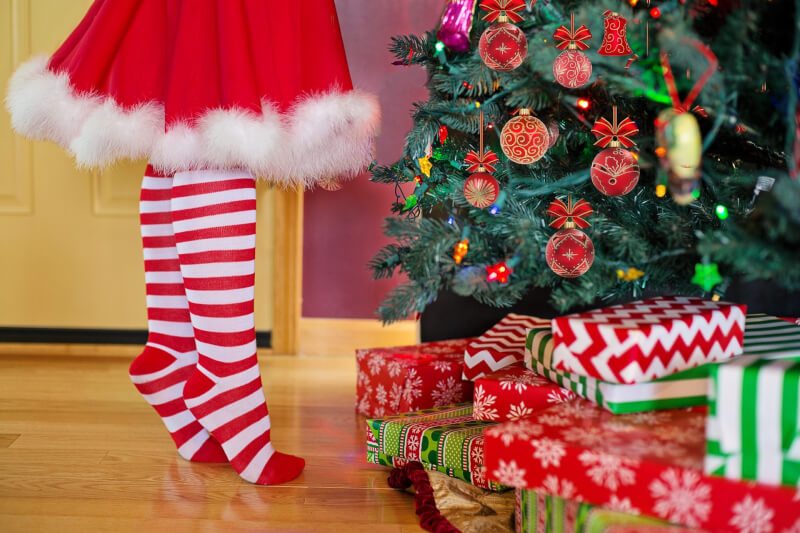 Once upon a time, before Christianity, black devils with horns walked the Earth, mighty gods of thunder rested below high peaks of the mountains, and fairies danced in the glowing sunsets.

And once upon a time (in the 3rd century, to be specific), there lived a man in Turkey, a very generous and good man, who gave gifts to those less fortunate. His name was Saint Nicholas of Myra and for some reason, completely unknown to us, he befriended the black horned devils. This Nicholas guy was a bishop and he died on December 6th.

This same guy, who later became a saint, is the first good bearded man that stops by as soon as December hits the calendars. Yes, he pays us a visit on his death-day (oh, how joyful) and is always accompanied by the angels and those horned beasts we call or Krampus (also found in Austria, Croatia among others). Now, Saint Nicholas or Miklavž may seem nice and PG13, but his devils will scare you too, not just your kids, with their masks, black rags, dragging chains behind them.

Traditionally, Miklavž gifted people with tangerines, walnuts, dried fruits, carobs, and apples, but these luxurious foods were only booked for the well-behaved children, encouraging them to maintain their good manners. On the other hand, were you a nasty, sneaky, and tricky child, all you’d get is a rod from the Krampus!

Saint Nicholas doesn’t travel on the sleigh, with reindeer nor fairies. He’s a saint, remember, so he lives in heaven and descents from it once a year; the manner of his transportation remains a secret to this day. He’s also the oldest and most traditional December visitor of the three (obviously, he was born about 18 centuries ago!). 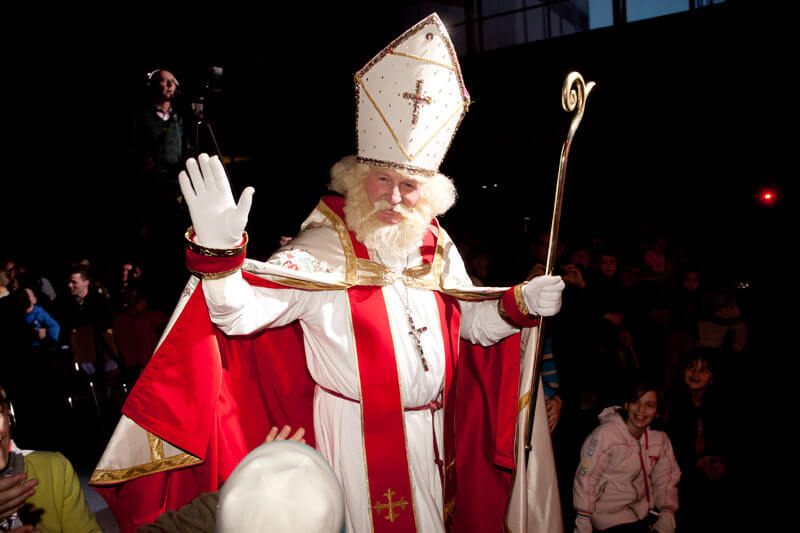 A White Russian with a Slovenian twist

Those of you who paid attention in history lessons may recall the Soviet Union, a large country that broke up in the late 20th century. Well, Soviet Union was a totalitarian state and it may have given the world Stalin, red color, indestructible cars, dozens of scientists, and monkeys in space, but it also gave us something very special, something we cherish to this day.

Grandfather Frost is based on Russian Ded Moroz, a fictional man with roots in Slavic mythology from a pre-Christian era. We call him Dedek Mraz, and he was an alternative to the globalist and capitalist Santa Claus back in the day when we still lived in Yugoslavia, a country with a soft-communist (very soft, think socialist) regime that never sent monkeys nor any other living beings into space.

Now, the Russian bearded man is sometimes said to be married and sometimes accompanied by his granddaughter. Our own Grandpa is single, living all alone under the mountain Triglav, Slovenia’s highest peak. Luckily for him, dwarves keep him company and he’s dressed for winter at all times!

After the Yugoslavia-Soviet Union crisis, our Grandpa and Soviet Grandpa went their separate ways and our Frost actually gained a unique appearance that has stuck in our minds ever since. A famous Slovenian painter depicted him with a white beard, a walking staff, a large basket on his back, a round dormouse fur cap, and long grey leather coat, decorated with traditional Slovenian ornaments.

After he was properly situated (under Triglav), dressed accordingly, and found companions (animals, snowflakes, dwarves) for the long journeys when visiting children, Grandfather Frost started officially parading the streets of Ljubljana in 1953. He still does it to this day, riding a horse-drawn sleigh and giving children candy.

While this good old man was at first created to draw attention from anything religion-related back in the day (he brings presents on the New Year’s Eve), he has by now lost links to former ideology, nostalgia for Yugoslavia or socialism. He has become a traditional December figure, our own invention and much closer than Santa to many. We even sing him a song! 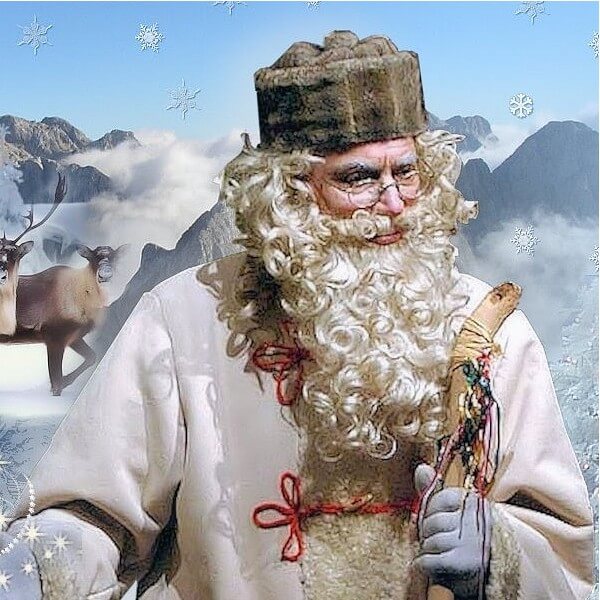 We are the World, we are the Children

Come the fall of communism, the world decided to dress up and throw away those 50 shades of grey and bring joy and happiness with a refreshing bottle of Coca-Cola and the smiling, chubby, red-nosed man who claims he can fit into any chimney and travels in a reindeer-drawn sleigh. But you already know that and it’s quite straightforward. So let’s complicate this a bit.

Santa Claus is actually the same person as that ancient guy from Turkey, Saint Nicholas of Myra. Confused yet? Apparently, the Dutch and the Scandinavians resurrected the poor man in the early 19th century, added new traits of different cultures and traditions to his character, but the Santa as we know today, got his clothes in 1931 when depicted for the Coca-Cola ad (he wore black and green before that).

The West may have Santa Claus, but we have the original Saint Nicholas and his resurrected capitalist figure who may be charitable alright, but now he lives in the North Pole with elf servants that suffer from terrible workload just as those in the Harry Potter movies.

And just like the Harry Potter series (but a few years earlier), Santa has entered Slovenia through books, movies, and music slowly and quite stealthily. We haven’t actually known the figure of Santa before, even though Christmas as a celebration dates back to the pre-Christian age. 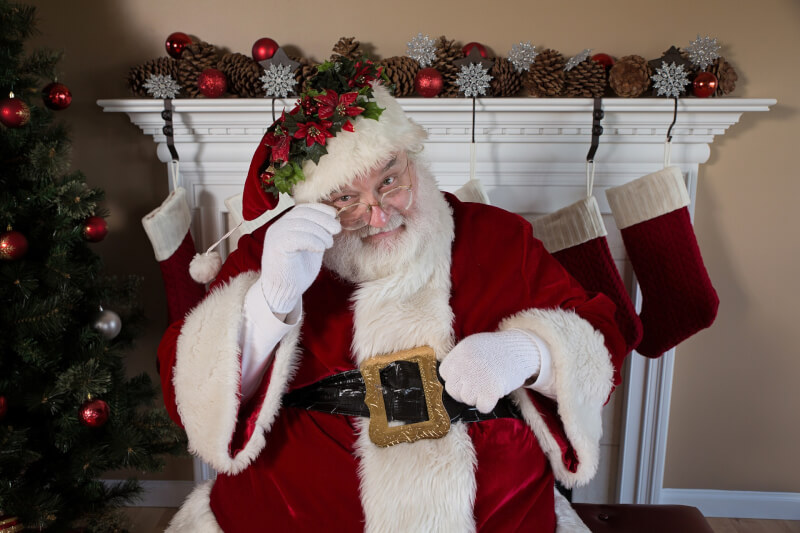 Santa Claus in English or Božiček in Slovenian

In short, our three bearded men consist of one person with identity issues and a Soviet propaganda figure that has survived much longer than the Soviet Union itself. But, there is a bright side in all of this mess! If you look closely, the three old men are actually a result of the long history, traditions, and habits of various time periods, culture, and much much more!

Us, the Slovenians may seem closed at times and old-fashioned (at least to ourselves), but it’s amazing what we’ve done with these three good men! Many people complain about the confusion, claiming we need to eliminate two of these good fellows, but some of us are convinced that they should all stay right where they are.

They are intertwined with our culture, whether it’s the pagan mythologies, typical Slovene characteristics, and traditions, as well as the Americanization, handed on the platter through our televisions and music. We’re a little bit of everything and proud of it all! Above all, we should continue to stick to it because it’s just so unique. So, put this small country on your to-do list, and stop by next time you’re in Venice or visiting Vienna Christmas markets.

How many good men will visit you this holiday season? If you’re convinced that one is simply not enough, we invite you with open arms to join us and be amazed! After all, Grandfather Frost was a hero of many, and we believe it’s high time you meet Saint Nicholas as well!

Watch Christmas lights decorating the streets of Ljubljana and the first good man, Miklavž, giving candies to the children. 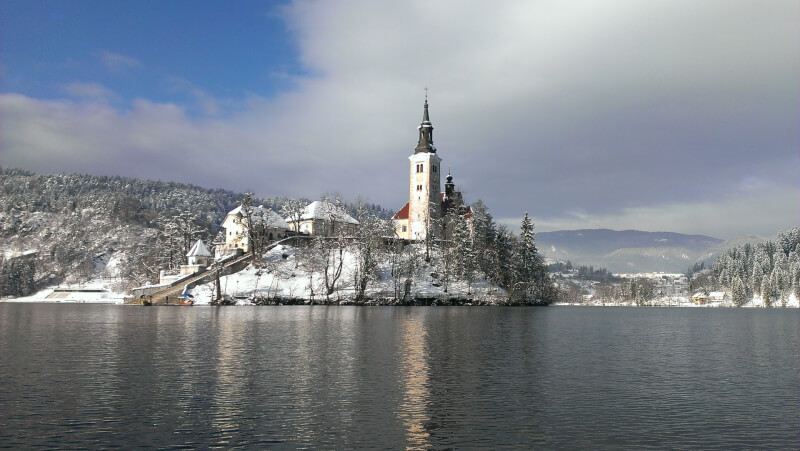 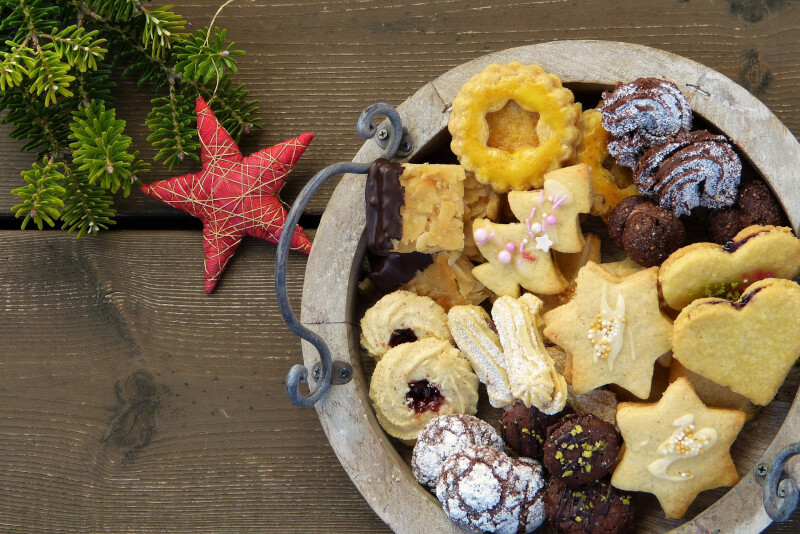